During the two years I was doing my Film A Level at College, I kept a film diary recording every film I watched. It was through studying film that I realised just how much I loved to watch them, and even after I finished A Levels, I kept a film diary- this time on Letterboxd.

I love film so much I’ve decided that I want to spread that love, and encourage more people to talk about films they love/hate, and recommend them as well. Film Friday is going to be a new series on my blog that hopefully doesn’t fail miserably where I do those things said above just to start up the discussion. 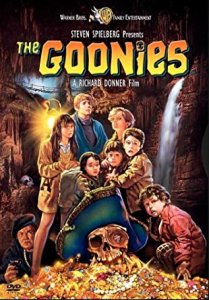 I figured I would go old school and start by talking about my all time favourite film: The Goonies, a 1985 film directed by Richard Donner that kind of kick started my love of the 80s.

For everyone that doesn’t know, The Goonies is about a group of teenagers who go on an adventure to find pirate treasure that will save the Goon Docks, where all the kid’s homes are at risk of foreclosure so a golf course can be built there instead. Yup, a golf course. Rich people are wild.

Growing up, my parents let me watch anything. I had watched the original Underworld trilogy by the time I was 8, and, compared to that, this is tame. But there’s something about The Goonies that makes it so goddamn rewatchable, a crudeness to the humour that appealed to little 8 year old me, and still appeals to me now at 19.

And this film is crude, but it’s also hilarious. I can quote the entirety of the scene where Chunk breaks off the penis of Mikey’s mum’s statue and glues it on upside down. The scene in the attic where Mouth destroys a priceless painting for the sake of a shitty joke, I can mimic everything that happens. I know Stef and Mouth’s argument over President Kennedy in the wishing well like the back of my hand. Everytime Mikey makes that stupid B flat joke, I crack up. The humour in this film means I go back to it again and again and again, and am always guaranteed to laugh. This is my ultimate ‘happy’ film.

As much as I love the totally out there plot of the film that has inspired an immeasurable amount of stories that came after it, if it wasn’t for the cast and their incredible performance, this film wouldn’t be as amazing. For me, so many of them become their characters- for a lot of the cast, this would be their most famous performance before they dropped out of Hollywood. Sean Astin is in this film! He’s adorable, with his asthma and his braces, and I had the biggest crush on him as a kid. [I had a crush on most of the characters in this film, honestly.]

The Goonies also kick started my love for the 80s, and coming-of-age films. Although this is definitely not as serious as some of the other 80s films I’ve watched- Stand By Me, Heathers, a lot of the brat pack films- it being so lighthearted made me realise the importance of showing friendships and strong sibling bonds in the media we consume. There’s this moment early on in the film, where, in a moment of anxiety, Mikey voices how worried he is about his dad and losing their home to Brand [played by Josh Brolin], his older brother. Rather than brush Mikey off, Brand agrees with him, before dragging him inside. It was that one moment of solidarity and brotherly affection that convinced me that a sibling relationship can make or break a film. As someone who is very close to her younger sister, seeing that moment made me feel like a bond I didn’t see shown very positively growing up was actually really important. Brand spends the whole film looking after Mikey, however begrudgingly he does it, and I could see myself in that. I still can.

I could go on about this film and it’s influence on me forever. I obsessed over Corey Feldman so much between the ages of 11-13 because of this film that my mum and dad bought me the whole Lost Boys boxset, Stand By Me AND a copy of the film just to keep me quiet [I didn’t watch the boxset, because I was 11 and convinced I would get into trouble watching an 18 without my parents, who didn’t like the Lost Boys. My brother ended up stealing it off my shelf and selling the boxset for 50p in the end, and I still hold it against him 8 years later].

Kerri Green’s influence was so strong over my gay little heart, I now have a crush on every single cheerleader I’ve ever met, and will defend all slightly-ditzy female characters who love their bodies till the day I die. I remember being jealous of her and Mikey, because of That Scene, when I was a kid. Looking back, I’m over the moon she destroyed that rich dude because, as jealous as I still am of Brand, he was so much better for her. There’s this lack of sexism towards the female characters that’s quite rare for a group of teenage boys, especially in an 80s film [here’s looking at you, The Monster Squad and Sixteen Candles].

Although this film isn’t without its faults, that are a lot more obvious now I’m older- the only fat character is a source of comedy [as a fellow fat kid, I loved Chunk], bad disability rep- I love it for what it is. It’s a fun story about maintaining friendships, that fear of losing what means so much to you, while also looking for pirates and overcoming danger that probably works as a symbol for moving onto the next stage of growing up. I will continue suggesting this film every time my friends and I have a movie night, and I’ll always be up for watching it whenever it comes on TV. 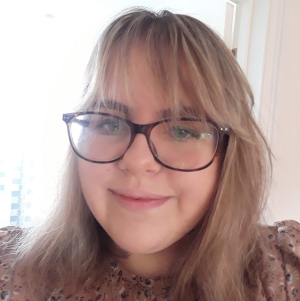