Since February, I’ve been reading lots of adult romance, a genre I don’t usually read a lot of. Although I have my issues that seem to reappear throughout, I have been enjoying myself, so I figured I would review some of the stand out books I’ve come across! 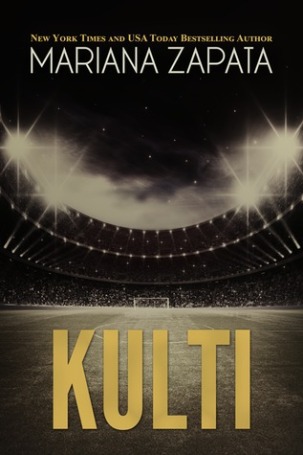 When Sal Casillas, star soccer player, finds out her team is being coached by the player she worshipped as a kid, she has certain ideas of what’s going to play out. Until a quiet, reserved Kulti appears, going against everything she’s ever thought about him.

Out of all of Mariana Zapata’s novels that I’ve read- The Wall of Winnipeg and Me and Wait For It– this one has my favourite romance. Sal and Kulti have a much better slow burn build up, from enemies to friends, and it’s so heartwarming seeing them become best friends before anything romantic happens. Zapata is great at writing slow burns, and of all her books, this has the strongest.

This also has the best sports side to it. Sal comes from a family of soccer fans, and I’m the same, so I love reading about it. I keep nearly typing football, so excuse me for being very British. Zapata really does write the sport well and digs deep into what goes on behind the scene, although it is more surface level than some of the other sports novels I’ve written. I never feel like Sal’s career and passion is put on the backburner for the sake of romance, and I’m very grateful for that.

However, one issue I have through Zapata’s novels is the general possessiveness in relationships. There’s hating on women for just being interested in a sports legend, slut shaming, and Sal acts possessive despite being in the same position as those women in her attraction to Kulti. There are so many lesbophobic slurs that are never really commented on in depth, too, and it really pissed me off. Also, Zapata can’t write sex scenes, and somehow the 1 sex scene in every book ruins the last 20% every time for me.

For this to go from a solid 4 1/2 star read to a 3 star, just down to girl hate, lesbophobia and the terrible sex scenes that are compulsory in her novels, isn’t a reflection on the other parts of her novel. It’s still a decent read, it just makes me feel sick.

The Hating Game by Sally Thorne

Lucy and Josh hate each other. Both assistants to co-CEO’s of a publishing company, they end up going up against each other for a much needed promotion. But the further in they get to their game, the more Lucy realises maybe she doesn’t hate Josh… and maybe Josh doesn’t hate her, either.

Love my terrible synopsis! Really, I enjoyed this as much as expected from the first page. It’s quirky and fun, the romance is kinda hot and the main characters have a great dynamic, and the sex scenes are GOOD. Thank God! Much needed after reading so much Zapata. I also love that they work in book publishing, and I think their dedication to doing their job well in spite of their dislike for one another is admirable. Complicated family relationships are explored, and- it’ll sound bizarre- the home sickness rep was… so good. I suffer from separation anxiety, in a similar way to Lucy, and I love the way it was written.

However… I had, like, so many issues. For one: fatphobia, ableism [use of the R-word]. More than once, Lucy is seen as a prize between two male characters who put up a big macho fight to win her. She’s infantilised constantly, with how small and cute she is, and there’s so much sexual objectification and predatory behaviour towards her throughout this book that’s never addressed as it should be, considering it’s straight up workplace sexual harassment and it’s disgusting.

Also… Josh is an asshole? He hurts Lucy constantly and is possessive, and so much of their relationship is so icky and bordering on uncomfortable especially early in the novel. They throw around the word ‘stalking’ like it’s normal, say they hate each other, and Lucy straight up thinks Josh is going to murder her at one point. If you want a sexy, risque workplace romance, a ‘hate-sex’ relationship, there are more ways to do it than writing the main character- small, petite, oh so fragile- thinks she’s about to get straight up strangled to death in what’s supposed to be a sexy scene.

Overall… okay, decent, had fun and it was well written in places, but it’s far from amazing, and the issues are glaringly terrifying to me.

Lisa’s tastes were always…unique. Longing to be restrained, without restrain. Lisa always felt like something was missing from her love life─until she met Ally. Ally was implacably ordinary─successful job, nice house, an average childhood─except for her preference for bedroom domination.

The writing of these characters is really great. I feel so familiar with them already, their lives and their relationships, their loneliness and their pursuit of belonging. It’s heartfelt while still being fun, and a great bond is already building between the two main characters. The sex never feels exploitative or like it’s sexualising women, especially queer women, and there’s already an interesting exploration of sexuality in many different ways.

I also really enjoy the art. The detail is stunning, and the sex scenes are…. very much good. Well drawn. It’s a bit too word heavy for my weak little eyes, unfortunately, which took me out of a few scenes which could benefit from not having as much text on the page, as we can infer it from other things going on, but overall it’s still strong and the dialogue is well written.

Out of all of these, I’d recommend this the most for general positivity, as well as great relationships and well done sex scenes that don’t feel dangerous or unhealthy!